What the heck are we up to!

As you may know already, my friend Matthew and I have been working on an RPG system, and setting, we call Ruttigers.

Here’s a peek into the thought process we’ve have gone through over the past few months:

Yes, those exclamation marks denote how excited we were with each idea. We definitely were never perplexed, frustrated, or at odds on the direction to take, just excited…
… if you believe that, I have an owlbear saddle to sell you, cheap.
Anyway, after a lot of hand wringing and some hefty mathletics, we had a fairly solid “create your own class” system, along with a few other fun mechanics, so we decided to share it with a few friends and get some feedback.
Once we got the feedback, we soon realized we had a BIG issue!
Our astute gamer friends generally liked the game, and the modular class building, but it seemed like each person had a few specific mechanics that they wanted in the game, a few mechanics they heartily disliked, and these opinions often conflicted.
We were perplexed at first. How could we make our awesome-coolest-ever  system if even our small group of old friends couldn’t agree on what rules set worked best?
Suddenly, we had an epiphany!
Since we’d already created a modular system for many parts of the game, why not just make modular rules for various play styles?
PLAY STYLES
We wanted to keep ALL of our old friends happy, since they knew really embarrassing stories about us from high school and college, so why not create a system where they could have several options for things like Attributes and Ability Modifiers, Custom or Pre-built Classes, Initiative, etc.
We started work, but we soon realized that we had another issue. Too many choices can lead to option paralysis, so we needed to take our disparate rules modules and sort them into understandable and relatable Play Styles, to make the player’s choices easier.
We ended up with five Play Styles:
Ruttigers Core
Essentially a mix of old school mechanics, and more modern mechanics, creating a hybrid to my own personal tastes.
Modern
More modern mechanics, focused on detailed player character creation, and with characters that start out more heroic.
Classic
An homage to the basic play style, with some classic mechanics, and a more “zero to hero” style of character advancement.
Old School
Essentially, similar to the Classic play style, but set to hard mode, much like some of the oldest of old school games.
Quicksilver
Our fast play variant, easily picked up by new players, great for lunchtime games, the style championed by my friend Matt.
We liked the flexibility this gave. It wasn’t about “this is the right way to play,” it was more about “let’s try this way next,” which we both liked.
With the play styles sorted, we now needed to find a way for players to access them, without having their brains melt from info-overload.
So, we went to work on the page layout next, to try and create an interface of sorts.
PAGE LAYOUT
Our general idea was that, if we figured out a clear and simple page layout presentation, then we could subdivide each rules module into a distinct Play Style.
Shown below are the various Initiative System options for Ruttigers Core, Modern, Classic, Old School, and Quicksilver: 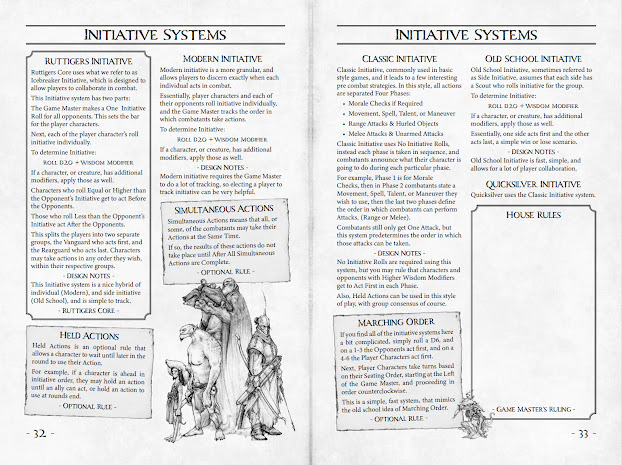 If you like any of the other four play styles, Modern, Classic, Old School, or Quicksilver, those rules are included next in the layout, as well as a few optional rules, and design notes.
Also, if you wanted to mix up rules, you could just say, “let’s play Modern, but use Classic Initiative, and Hard Core Hit Point Recovery.”
This was simple, we liked it!
Our next step was to define the play styles via the Rules Modules each would contain.
RULES MODULES
Now that we had a viable solution to the very complex problem, which we had brought upon ourselves, we started work on the the various rules modules, such as:
As we worked out the overall rules design, we realized some systems shared modules, others were very unique, and some systems dropped a module or two, such as our Quicksilver system which doesn’t use attributes.
Our main challenge was to attempt to model the each play style, and it’s mechanics, while maintaining a set of “backbone” rules to serve as a scaffolding for the system overall.
That is where we are currently at, solidifying the backbone rules, laying out modular rules, and prepping a vertical slice of the rules for a play test.
We are hoping to have a play test document ready in about two months or so, but in the meantime, we wanted to keep showing pieces of progress for anyone who is interested.
This project is pretty much just two old friends, myself and Matt, working on our pet project in our spare time, (of which we both have little).
We do hope that you spread the word, and we want you to share your ideas throughout this wild adventure.
Our eventual goal is not just a set of modular rules, we would love to have people contribute ideas, and open it up to players. The dream is to help publish ideas from other folks as well.
Truth be told, I miss the days when I would be invited to someone’s house, see the maps for their home brew campaign, admire handmade character sheets covered in doodles, and then play the game, meeting the NPCs, odd creatures, and fighting the BBEG de jour.
I want to encourage that, because I love that raw creative energy, and the unique voices it brings literally to the table.
We will keep you posted on our progress, but in the meantime, please pass this along to your friends, that would be such a huge help to us!
Richard & Matthew
Posted by Ruttigers RPG at 4:19 PM 4 comments:

Welcome to the first official post of Ruttigers RPG!

I am Richard Whitters, and for roughly 14 years I worked as a concept artist on Magic the Gathering, and a concept artist, art director and art studio manager on Dungeons and Dragons.
Long before I started work with Wizards of the Coast, my friend Matt and I had a home brew setting we worked on for many years, as many D&D players do. Over the years we brainstormed tons of ideas, did a lot of world building, and we generally fiddled around until we really started to love the setting.
Well, we soon realized we needed more than a setting. Our game world was born over 30 years ago via playing D&D with our old friends (Clark, Pat, Rob, Sam, and the crew), and we loved D&D, but we wanted more flexibility in the system, and more story put into creating a character.
So, we started developing our tweaks to the D&D system, and  compiled our design objectives:
All of that is a pretty tall order, but we would like to use this blog space to share our design ideas, show you some samples of our work, and most importantly, to get your feedback.
I really hope you all have as much fun as we have had with this! 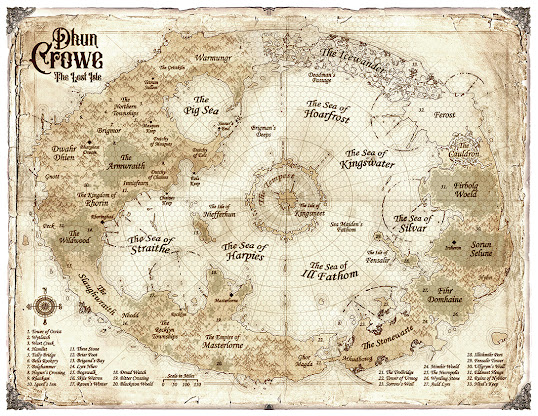 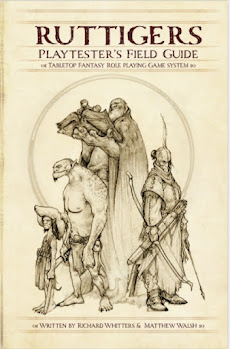